Our goal was to recreate one of the most mystical relics of the SS - the SS honor ring (also famous as SS-Ehrenring, SS-totenkopfring).
We do not promote the ideas of Nazism and do not share the views of this movement.
This is just a historical reconstruction, for museums, collectors and people just interested in this topic.
We copied to the smallest details the SS-totenkopfring of sample 20.4.37 with the name Rapparlie, as well as the rings of the sample of 40years, 41 years and the ring of the sample of 44 years, you can find them in the Projects section. 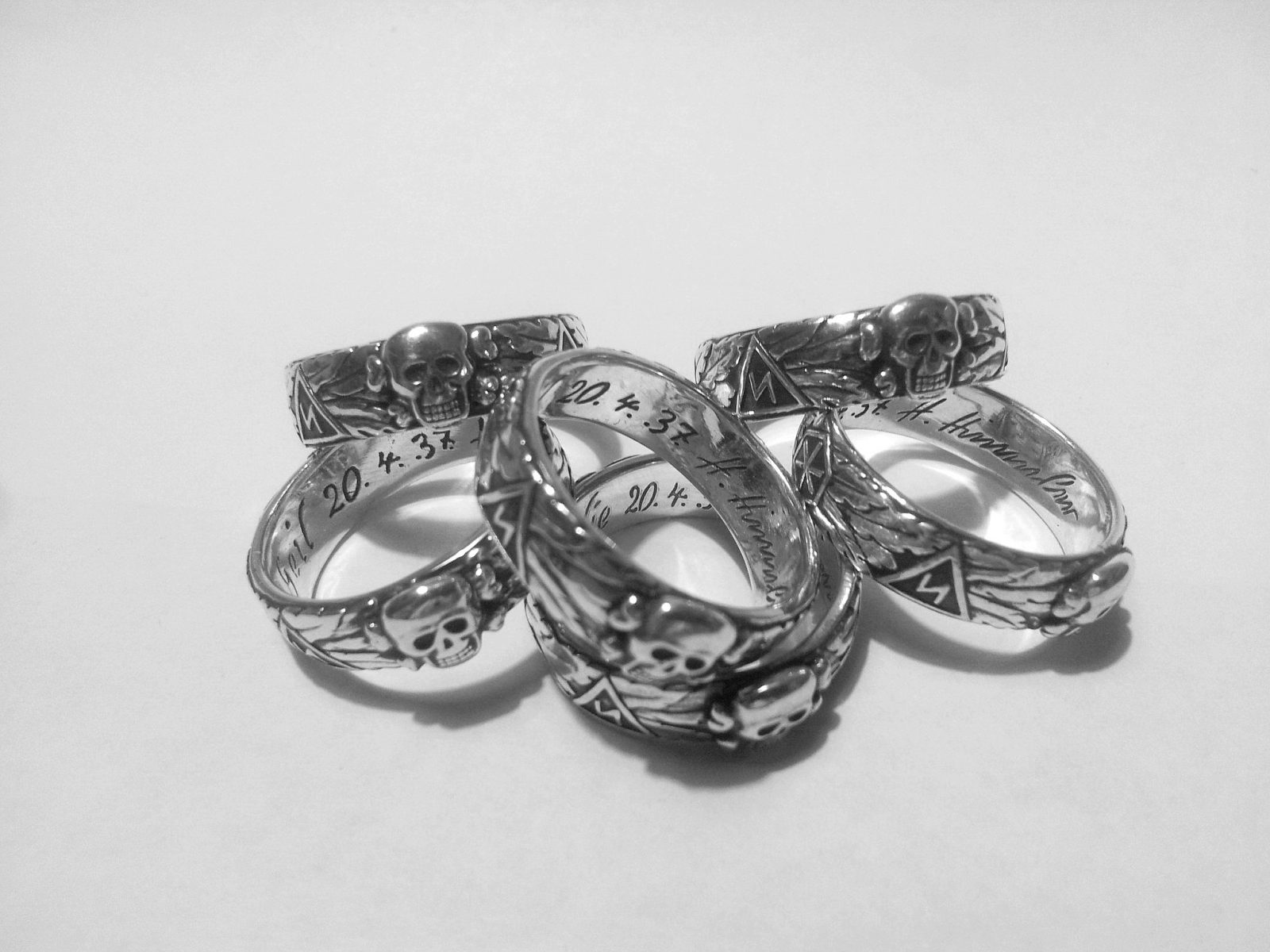 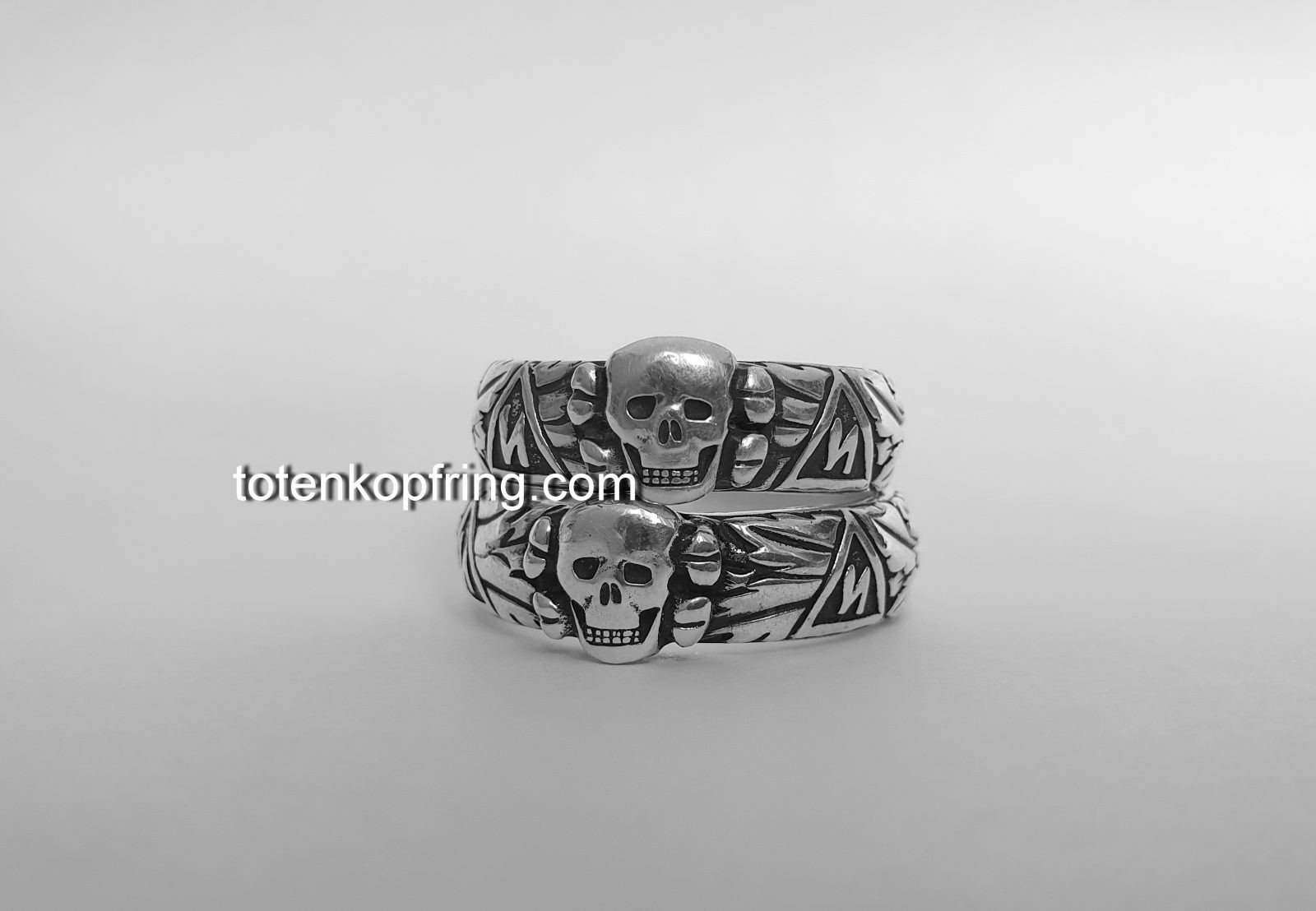 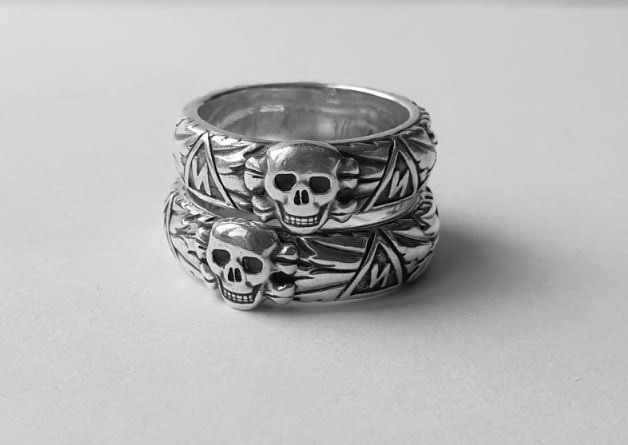 We are proud of the work that allowed us to recreate these rings with 100% accuracy. The worn-out areas have been carefully examined and restored. As a result of the work done, we received the rings in their original form.
Most of the copies made so far have problems - reduced dimensions compared to the original ring (they are smaller in scale than the original rings), distortion of the ornament and runes, poor elaboration of the details of the ring, incorrect skull (fantasy).
Our copy of the rings does not have these problems, their advantages are that it has the same dimensions as the original SS-totenkopfrings, high-quality details, ornament and runes, absolutely identical parts of the skulls and ornaments, everything is like on the original SS rings. By purchasing these copies, you get a 100% genuine copy, repeating in weight, size and details the originals of rings of early models - 1937 and later versions of rings of sample 40, 41 and 44 years. Any sizes are available for you, the ability to order a ring with any personalized inscription inside, all rings are made in the same way as the original: after making the rings, they are formed into the required size of the customer and the skull is soldered, all rings are finished by hand, like the original rings. All rings are made of 925 sterling silver.

This high quality replica of the SS honor ring (SS-Ehrenring, SS totenkopfring) replicates the original.
It all started in 2016 when I copied and restored the first SS ring from 1937.
Carefully restored everything that was lost (the original lost some parts during the process of wearing). The model is identical in size, runes, skull and height of band ring to the original ring from 1937.
The ring has a butt seam and a welded skull.
Inside the inscription S.lb Geil 20.4.37 H.Himmler.
Since then, rings 40, 41 and 44 years old have been copied, in fact the rings have the same shank and differ only in the design of the skulls.
Now they are available in the Projects section !!! The SS honor ring (SS-Ehrenring, SS totenkopfring), unofficially called Totenkopfring (SS-Ehrenring, SS totenkopfring, наградной перстень СС), was an award of Heinrich Himmler's Schutzstaffel (SS). It was not a state decoration, but rather a personal gift bestowed by Himmler. The SS Honor Sword and SS Honor Dagger were similar awards.
AWARD The ring was initially presented to senior officers of the Old Guard (of which there were fewer than 5,000) who had displayed extraordinary valor and leadership skill in battle. An additional requirement was a clean disciplinary record, and a subsequent blemish on it would require the wearer to return the ring. By 1939, disciplinary issues aside, it was available to any officer with 3 years service in the SS, and in World War II virtually the entire SS leadership, including the Waffen-SS and Gestapo, had the ring.

Here are the correct dates that were present on the original rings:

Since the age of 36, four dates have been identified for ring insertion

1936-1944
20.4  - A. Hitler's birthday.
21.6 - summer solstice.
9.11 - beer putsch.
21.12 - winter solstice.
On 17 October 1944 production of the rings by Gahr & Co. of Munich was halted due to the increasing economic stresses of the final stages of the war. The rings were made by a die press then run through a design matrix. The skull was cast and soldered on later, with the recipient's name, the award date, and Himmler's signature engraved on the interior of each ring.
In addition every recipient got a standard letter from Himmler which described the meaning of the SS-totenkopfring.
The name of the recipient and the conferment date was added on the letter. In the letter, Himmler wrote that the ring was a "reminder at all times to be willing to risk the life of our selves for the life of the whole".
In 1938 Himmler ordered the return of all rings of dead SS-men and officers to be stored in a chest in Wewelsburg Castle. This was to symbolize the ongoing membership of the deceased in the SS-order. After all further awards of the ring were halted in 1944, Himmler ordered all the remaining SS-totenkopfring, approximately 11,500, blast-sealed inside a hill near Wewelsburg
DESIGN
The design of SS honor ring (SS-Ehrenring, SS-totenkopfring, наградной перстень СС) reflects Himmler's interest in Germanic mysticism. Karl Maria Wiligut has been credited with the design.
The SS totenkopfring shows skull and crossed bones, crossing behind the skull - the SS symbol - on its top. The skull (or Totenkopf) was the traditional symbol of the SS, taken from other German and Prussian military units of the past.
The meaning of the skull described in Himmler's accompanying letter: "Der Totenkopf ist die Mahnung, jederzeit bereit zu sein, das Leben unseres Ichs einzusetzen für das Leben der Gesamtheit." which might be translated as "The skull is the reminder to be prepared at anytime to risk the life of our own ego for the life of the community."
Armanen runes appear prominently on the ring.

• One Sig Rune left and right of the skull framed by a triangle represent the power of the sun and conquering energy
• A Hagal rune (framed by a hexagon) which represents the faith and camaraderie that was idealised by the leaders of the organisation. The esoteric meaning of the Hagal rune was, according to Guido von List, to: "...enclose the universe in you and you control the universe."
• A Swastika (standing on the vertex) framed by a quadrat. The SS liked to portray the Swastika as another influential symbol of the power of the Aryan race.
• The double runes on the rear of the ring framed by a circle were to be Heilszeichen (literally: signs of salvation) of the past. They were a creation of the SS designers rather than historical runes. They are a "gibor" rune plus a bind rune for "o" and "t". The bind rune was designed by Wiligut, and spells "Got" the Old High German word for God.
The ring is wreathed with oak leaves.
On the inside of the ring was engraved S Lb for "Seinem Lieben" then the surname [only - no initials] of the bearer, date of presentation and a facsimile of Himmler's signature. Recipients also received a specially designed box decorated with the SS runes for storage or carrying.

The SS honor ring (SS-Ehrenring, SS-totenkopfring, наградной перстень СС) was WORN on the ring finger of the left hand, the skull had to look at the owner. But as you can see from the photos of the examples of wearing, this rule was violated. For example, as you can see in the photo gallery, Sepp Dietrich wore a little finger, Heydrich wore on the ring finger, right hand.
POST-NAZI ERA
All rings were to be returned to Himmler after the death of the owner or when they left the SS to be kept in Wewelsburg as a kind of individual monument to the owner. When the owner of the ring died in battle, his SS comrades had to make every effort to reclaim SS-totenkopfring and prevent it from falling into enemy hands. The famous story of the SS-totenkopfring returned "by January 1945, 64% of the 14,500 rings produced were returned to Himmler" is a complete fiction.
In the public domain (on hand) and lost rings, there are very few left and the declared figure 14500, I think it is wrong, this is a mistake, the figure is much less. After the end of the war, many SS-totenkopfring were also (at the direction of Himmler) buried along with the people to whom they were given.
US Army Captain Black, who captured Wewelsburg Castle, found about 200 SS-totenkopfring in a silver box and handed them out to his troops. The remaining SS-totenkopfring were never found. At current market value, the missing rings would cost between £ 3,000 and £ 5,000 each, or between £ 27,840,000 and £ 46,400,000 in total.
It is believed that there are about 3,500 rings in existence today, so they are very rare collectibles.
By purchasing my copies, you can touch the history of these rings, having received the highest quality copy in your hands, recreate the history of these SS totenkopfring or the memory of your relatives.