The SS Honor Ring (Der SS-Totenkopfring or SS-Ehrenring) was instituted at the personal behest of Reichsführer-SS Heinrich Himmler and was awarded for outstanding achievement and loyalty. It remains the most highly prized and sought after of all SS awards.
The father of the graphic and runic design of the ring was Karl Maria Wiligut, also known as Karl Maria Weisthor.
He became interested in the occult while serving in the army. He declared the legacy of the ancient tradition of Irminsul, the symbol of the Germanic pagan faith.
The ring was established in 1933 and it is possible that the first presentation took place in the same year in the month of December.

AWARD
1. All members of the SS up to ID number 3000
2. All SS leaders from the Sturmführer and above who joined the SS before January 30
1933 and be a member for 2 years

All SS leaders who have been awarded the ring are ordered according to the regulations to constantly wear the ring on the ring finger of their left hand. I forbid publishing the ring award in any new newspaper. The ring reward is an external sign that in the battle and the order internal value is achieved and in a single approved alliance loyalty to the Fuhrer and his ideology. The ring is not a medal; you cannot part with personal propaganda with its award.

Here are the correct dates that were present on the original rings:

1943
30.1.
20.4
21.6
9.11
21.12
On 17 October 1944 production of the rings by Gahr Co. of Munich was halted due to the increasing economic stresses of the final stages of the war. The rings were made by a die press then run through a design matrix. The skull was cast and soldered on later, with the recipient's name, the award date, and Himmler's signature engraved on the interior of each ring.

DESIGN
The design of SS honor ring (SS-Ehrenring, SS-totenkopfring, наградной перстень СС) reflects Himmler's interest in Germanic mysticism. Karl Maria Wiligut has been credited with the design.
The SS totenkopfring shows skull and crossed bones, crossing behind the skull - the SS symbol - on its top. The skull (or Totenkopf) was the traditional symbol of the SS, taken from other German and Prussian military units of the past.
The meaning of the skull described in Himmler's accompanying letter: "Der Totenkopf ist die Mahnung, jederzeit bereit zu sein, das Leben unseres Ichs einzusetzen für das Leben der Gesamtheit." which might be translated as "The skull is the reminder to be prepared at anytime to risk the life of our own ego for the life of the community."
Armanen runes appear prominently on the ring.

• One Sig Rune left and right of the skull framed by a triangle represent the power of the sun and conquering energy
• A Hagal rune (framed by a hexagon) which represents the faith and camaraderie that was idealised by the leaders of the organisation. The esoteric meaning of the Hagal rune was, according to Guido von List, to: "...enclose the universe in you and you control the universe."
• A Swastika (standing on the vertex) framed by a quadrat. The SS liked to portray the Swastika as another influential symbol of the power of the Aryan race.
• The double runes on the rear of the ring framed by a circle were to be Heilszeichen (literally: signs of salvation) of the past. They were a creation of the SS designers rather than historical runes. They are a "gibor" rune plus a bind rune for "o" and "t". The bind rune was designed by Wiligut, and spells "Got" the Old High German word for God.
The ring is wreathed with oak leaves.
On the inside of the ring was engraved S Lb for "Seinem Lieben" then the surname [no initials] of the bearer, date of presentation and a facsimile of Himmler's signature. Recipients also received a specially designed box decorated with the SS runes for storage or carrying. 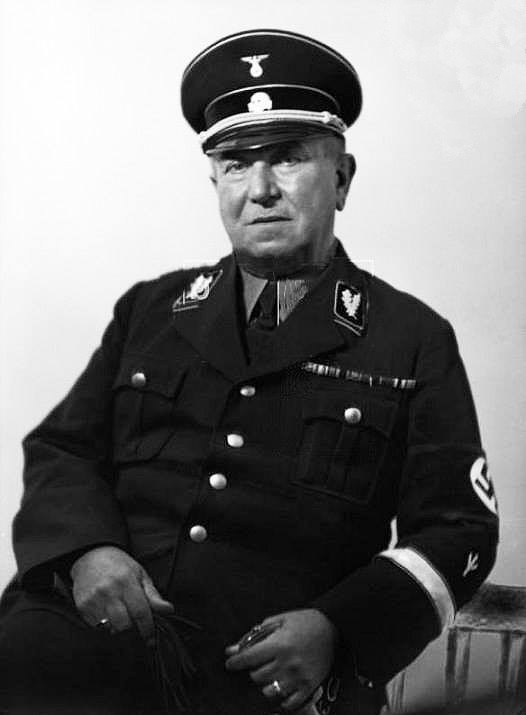