This is a copy of the ring, the Dutch parts of the SS. The original was found, on the battlefields, near Leningrad, where the volunteer units of the Dutch SS stood. The wolf hook (wolfsangel) ring is a talisman, as the wolf hook is an ancient symbol, protection from evil forces.
This is an exact copy, on the ring there are two jewelry samples - the letter "G" and a sword, which also indicates that the ring was produced in the Netherlands, during the first half of the 40s. 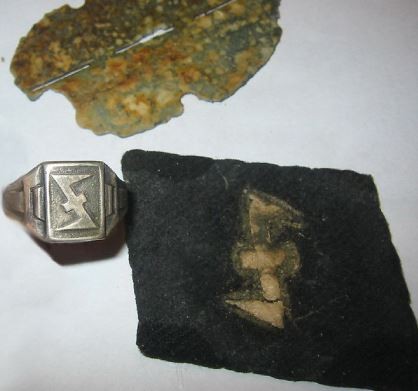 Some history …
Vertical and horizontal Wolfsangels and Hameçon
The Wolfsangel (German pronunciation: [ˈvɔlfsˌʔaŋəl]) is a German heraldic charge inspired by historic wolf traps, consisting of two metal parts and a connecting chain.
The top part of the trap, which resembled a crescent moon with a ring inside, used to be fastened between branches of a tree in the forest while the bottom part,
on which meat scraps used to be hung, was a hook meant to be swallowed by a wolf.
The simplified design based on the iron "wolf-hook" was often heavily stylized to no longer resemble a baited hook hung from a tree or an entire wolf traps. Other names included Wolfsanker ("wolf-anchor")
or Wolfsjagd as well as hameçon or hameçon de loup, a half-moon shape with a ring, or as cramp or crampon in English with a ring at the center, sometimes also called Doppelhaken ("double-hook"),
or a crampon with a transversal stroke. All of these symbols are still found in a number of municipal coats of arms in Germany. The crampon is also found as a mason's mark in medieval stonework.
In early times, believed to possess magical powers, it became a symbol of liberty and independence after its adoption as an emblem of a peasant revolt in the 15th century against the oppression of the German princes and their mercenaries.
German designs known as Wolfsangel.
The Wolfsangel was an initial symbol of the Nazi Party.
In World War II the sign and its elements were used by various Nazi German storm divisions such as the Waffen-SS Division Das Reich and the Waffen-SS Division Landstorm Nederland.
In pre-war Germany, the Wolfsangel was partly inspired by the immense popularity of Hermann Löns's 1910 novel Der Wehrwolf during the 1930s, where the protagonist,
a resistance fighter during the Thirty Years' War, adopted the magic symbol as his personal badge. The symbol itself bears a visual resemblance to the Eihwaz rune, historically part of the runic alphabet.